When I mentioned that ABC News used the ‘older version of the logo’, there were a few people wondering just what was so old about it.

After the initial rush to get the Firefox logo out for v8, it was soon enlarged for use in the situations such as the windows installer graphics, and its many flaws were enlarged too. I recreated the logo in Illustrator, this time paying much more attention to detail. This was going to be a version that would hold up to being printed large (like this!).

So here, side by side, are the old and revised logos. The differences should hopefully be a little more obvious: 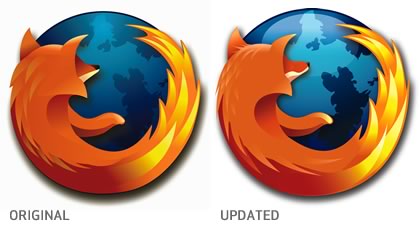 People tend to notice the glossier globe, and the furrier top of the head, but in particular, more attention was paid to the face.

So there you go!

This is the journal of Jon Hicks, one half of the creative partnership Hicksdesign.